Tour starts from meeting in Baku International Airport named of national leader Heydar Aliyev by local guide or company representative. Having collected all the luggage in the car, we go to place of stay. Passing along one of the main avenues, you can see a modern city with many illuminations and beautiful buildings. We arrive at the hotel where friendly staff will help for check-in to the room. Time to relax.

Morning start with continental breakfast. The most amazing part of the capital is the upland park, from where the Apsheron Peninsula is observed from a bird's eye, forming the shape of an eagle's head. Enjoying the delightful view of the seaside boulevard nearby, you can see such complexes as the Crystal Hall, the venue for Eurovision2012, the Aquatic Sports Palace where the water events of the 1st European Olympic Games 2015 were held, Flag Square which highest in the world and much more. New symbols of the city Flame Towers will begin to glow like fire from down to up already at the first twilight. 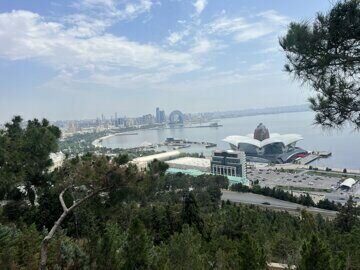 Just like in any metropolis, Baku has its own cultural center. This is fountain square, but on the buildings you will see the

inscriptions of Nizami Ganjavi and Khagani streets.
Numerous tourist restaurants, hotels, boutiques and everyday bustle of capital give this place its beauty.
Here for the new year and other national holidays, a festival called "Cold Hands, Warm Hearts" is organized, where a 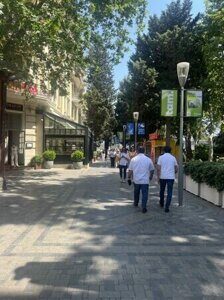 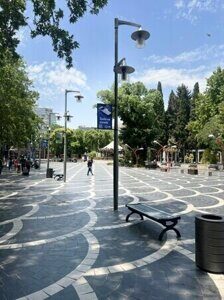 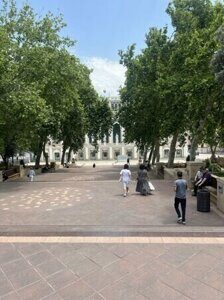 Azerbaijan has many historical and cultural monuments that have also been included in the World Heritage UNESCO.

with a cult legend is considered and the largest Shirvanshahs' Palace. 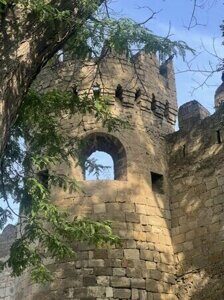 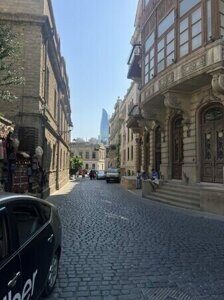 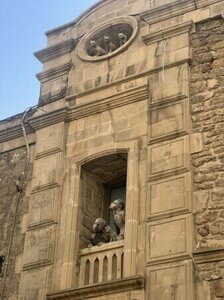 Most of the buildings here on the territory of the city of 22 hectares of total area belong to the 11th century AD.
At all times, this country has been located at an excellent geographical point connecting the trade routes of Europe

and Asia. So since the milleniums of the Great Silk Road, caravanserais were built here, which served as a place

for merchants to stay overnight.

At a distance of 70 kilometers from the center of Baku, there is a real historical and archaeological treasure of

the country, which is called Gobustan. The name "Gobustan" means "valley of ravines" or "land of ravines", since "Gobu"

means a ravine, a depression, and "stan" is a land or a country. Gobustan National Park is world famous for its rock

paintings. More than 40 thousand years BC, the ancient people, who were looking for shelter, stopped here, forming

tribes. This is not strange, because it was on the Caspian coast in this valley of ravines that they had everything to ensure

life. The first archaeological excavations in Gobustan began in 1939 by the Azerbaijani archaeologist Iskhak Jafarzade. He

studied the territory with a total area of ​​537 hectares, where in the mountains of Gobustan called Boyukdash,

tombstones and even several mounds. In 1948, an inscription in Latin was found, which confirms the presence of one of

the Roman legions in the territory of Gobustan, and there is also an inscription in Persian dating back to the 14th

century. In total, about 6000 rock paintings were found in Gobustan, which archaeologists call "petroglyphs". In 2007

National Park was included in the UNESCO World Heritages. This is one of the most popular places for lovers of history

and archeology. The thousand-year history of Azerbaijan let us know that here at different times people worshiped

based on fire worship. Fire worship originated in the first millennium BC, and according to some sources, Zoroaster, who

was the main prophet of fire worship, came from Azerbaijan. Also, as in many mature religions, Zoroastrianism has the

concept of good and evil, and good always overcomes evil. The god of right deeds, goodness and justice was called

Ahura Mazda. And the god of anger, evil and bad deeds was called Ahriman. Naturally, there were many more followers

of Ahura Mazda than the god of evil, so good always defeats evil and the followers of good and faithful deeds will find

eternal life and happiness in the next world. The holy book of fire worshipers is the Avesta. There are several temples of

Zoroastrianism on the territory of Azerbaijan. The largest sanctuary is the temple of fire worshipers "Ateshgah" in the

village of Surakhani in Baku. The very name "Ateshgah" means a house of fire or a place of fire. The temple was built in

the 18th century, but it was in this place that there was already a place of belief in fire worship.

At the moment, the temple is used as a museum complex and is visited daily by thousands of tourists from all over the

world. 27 kilometers from the central streets of Baku in the settlement of Mehemmedi there is a limestone mountain on

the slope of which a hot gaseous medium flares up. This eternal flame includes Yanardag, which means fiery mountain.

inspiration for fire worshipers in Azerbaijan. The fiery mountain was formed during a thunderstorm when lightning

struck the trees near the mountainside and the flames flared up due to a leak of fuel supply gas. Azerbaijan has a large

number of sources of gas in the form of a flame. Not for nothing is Azerbaijan called the “land of fires” Many travelers

reported about the eternal flame in their notes, books, and among them also the famous Italian Marco Polo. At the

moment, this place is used as a museum complex and its fame is growing day by day.